While on my trip to Pakistan, I was able to treat a 51-year old woman, whom we shall name Ms. B. Ms. B 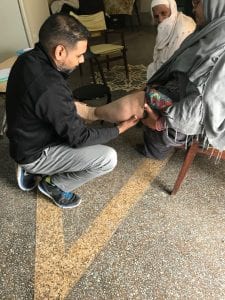 was suffering from knee pain for the past 3 months. She lives on the third floor of a house that she recently moved into. She has great difficulty climbing the three flights of stairs, and at times needs the support of a cane. Because of her knee pain she usually stays at home and is unable to travel to the market or perform other common household tasks. 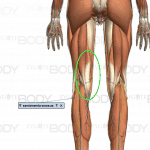 Ms. B stated she saw a Physician who prescribed ‘pain injections’. Unfortunately she did not have the name of the medications, but indicated she received the injections around her knee cap. The pain lessened, but after a week resumed again.

Assessing her knee revealed that it was stable, and she was able to bend and move it fully with some pain. There was no swelling or visible inflammation which was a good sign. She did happen to have a set of x-rays which showed mild arthritis, which was not significant. 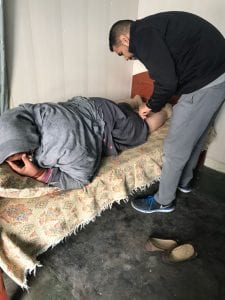 After lying the patient down, I examined her calf and hamstring muscles. One of her hamstring muscles on the inner part of her leg, was pulled and causing her pain. After some testing I concluded her diagnosis was Semimembranosus Tendinosis.

She seemed quite relieved once I told her it was mostly a muscle injury, and not arthritis as she had previously thought. After examining, we performed some stretches and massage techniques. Unfortunately not having all my tools, I used what little I had. I did some work with MuscleCare, a pain ointment and used a TENS machine. After, we discussed exercises and stretches and a home program. After taking a few steps she noted she felt an immediate difference in her symptoms.

After treatment I explained to Ms. B the importance of stretching regularly and showed her how to perform a self-massage on the area. I also advised her how to use her cane when walking up and down the stairs to help lessen her symptoms.